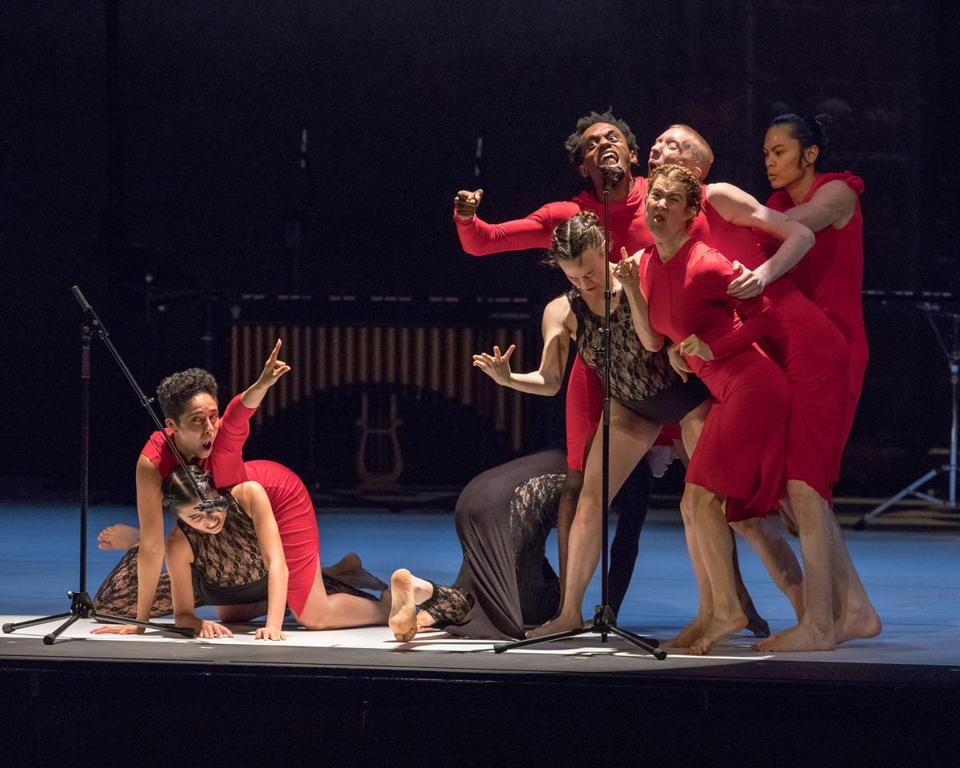 Mere mortals shouldn’t be able to move the way the extraordinary dancers of Ate9 Dance Company do. In the company’s Boston debut with artistic director Danielle Agami’s “calling glenn,” featuring original music performed live by Wilco percussionist Glenn Kotche, the nine dancers reeled through eye-popping phrases with speed, precision, and the flexibility of contortionists, down to toes that flexed, pointed, and splayed like the fingers of curious children. Put to the service of Agami’s vision, the performers unleashed a visceral, totally engaging gem of a performance at the Institute of Contemporary Art, clocking in at around one unforgettable hour.

Formerly a longtime member of Batsheva Dance Company, the Israeli-born Agami is a master teacher in Ohad Naharin’s groundbreaking Gaga movement aesthetic, and the influence shows. Dancers (including the choreographer) coil and roll, thrust and strike, creep and fall, twist and quiver. It is completely unpredictable, yet somehow kinetically organic. And for a good part of the program, presented by World Music/CRASHarts, that’s all you could process: these amazing bodies in near constant, utterly improbable motion.

Gradually we picked up traces of vulnerability, as the dancers began to connect with one another in a series of provocative, often humorous solos and duets. Dancers bore witness as Jobel Medina fell into awkward splats to the floor, repeatedly getting back up again until he seemed to wrest control over gravity and launched into vigorous lunges and spins. Others paired off, jostling playfully in eclectic duets, pushing and prodding, catching and holding, all with breathtaking speed and control, and an undercurrent of intimacy. Occasionally they gathered en masse, clusters coalescing into striking formations.

At one point, as Kotche played a sweet little ditty on glockenspiel upstage, the dancers lined up chairs to become an impromptu audience, feverishly hustling for sightlines. Shortly after, a microphone became the catalyst for a hilarious fracas, as the performers grappled for their moment in the spotlight. (Kudos to Jeff Forbes’s evocative lighting design.) As each seemed to unfurl an impassioned vocal solo in front of the mic, Kotche provided a soundtrack of expressive squeaks, squawks, and rumbles. In addition to his drum set and mallet instruments, the musician’s fabulously colorful and inventive score features all manner of devices to shake, strike, tinkle, clang, and twirl, including a piercing bell and siren that seemed to call the dancers to order.